Welcome to another Sunday post, the first Sunday post in December, which means Christmas is just around the corner! Are you as excited about it as I am?! Let’s get started! 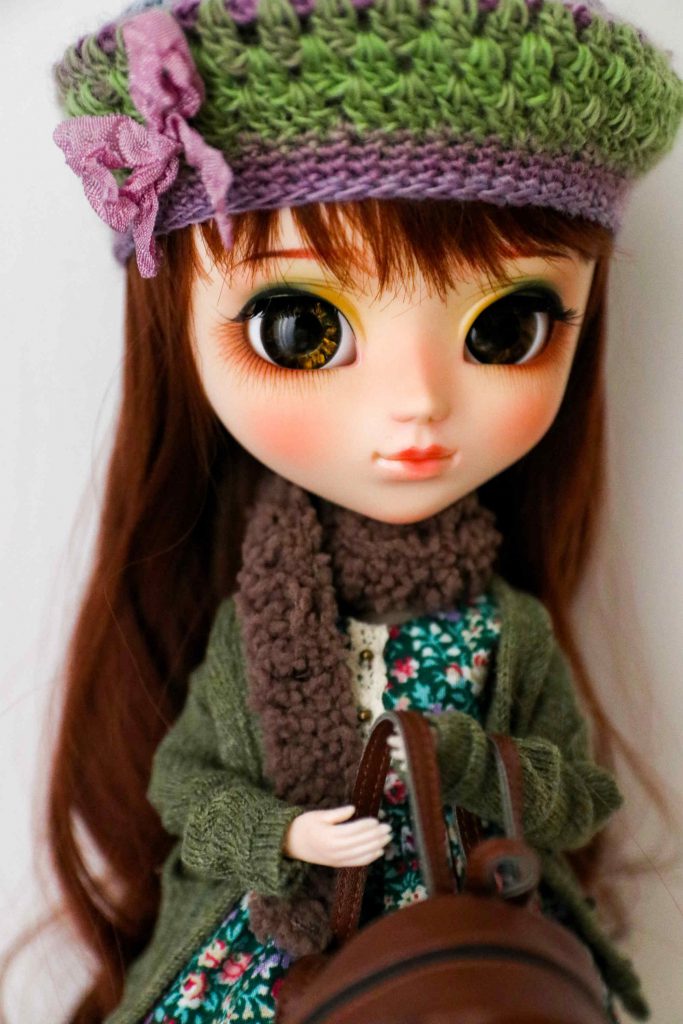 Welcome Suzume, my little addition to my Pullip family. Her face up was done by Mikiyochii and I had lots of fun putting the rest of her look together. I will write a whole post about her, since she absolutely deserves it, but my idea was a cute mori girl with gold and green eye make up and reddish brown tones. Suzume can also be abbreviated to Suzy, which only makes her cuter in my opinion. 😉 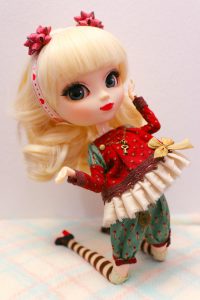 The reason, why this December feels extra special to me, is the advent calendar consisting out of Pullip photographs I am doing this year. Including the close up of Suzume’s face today on Instagram, so far Charlotte, Minka and Felicia had an appearance in their festive outfits. I decided to talk more about my pictures on Sundays, since I can freely ramble around without having a bad conscience. Charlotte (Pullip Myra) is wearing a new outfit from It’s My Caprice, consisting out of a flowy top and cute puffy trousers. I got it almost a month ago, when I started planning my pictures. In the same train of thought, I should mention that doing things like an advent calendar, is so time demanding that I had a hard time to get any writing done. On the plus side, I have only three to four pictures to shoot left, so new blog posts should resume soon! 😀

Minka (Pullip Cheshire Cat in Steampunk World) is my poster girl for Cinnamoroll appreciation with a need for upcoming Pullip Cinnamoroll. What I am most excited for in this picture, is the window shaped Cinnamoroll pocket mirror on the table. Doesn’t it look like a 1/6 scale window with little Sanrio friends peeking in?! Haha, at least I hope so. >< The biggest Cinnamoroll plushy on the left is the Cinnamoroll Café exclusive plushy, which you can also get in mascot size. I had to get it on a Tuesday, since it was sold out on Monday after the weekend. Just as a tip because he is an absolute must-have for me with his navy blue crown and rosy hearts on his cheeks! 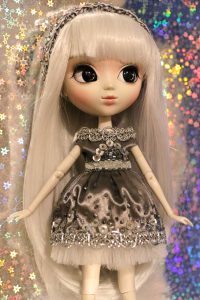 Also from It’s My Caprice is Felicia’s (Pullip Optical Alice) outfit, which I have had for a while now, but I can absolutely recommend anything from Michelle’s shop, if you want to spoil your dolls with outstanding beautiful clothes out of the loveliest materials! This particular ensemble, dress and headband, are called ‘The Snow Queen’ and I could not have found a better girl than Felicia with her ice cold greyish features to model it this Christmas. Since I am also experimenting right now with different kind of lights and editing, I am really happy, how my camera was able to capture the colors of the background, while still focusing on Feli’s beauty.

There is no way to express my excitement about my upcoming pictures and especially the ones featuring Suzume and her solo blog post. Before Christmas, I will have two more newbies to introduce to all of you. You might guess, who it will be, if you saw my Pullip wishlist! 😉

For new releases, Groove had a chill week after the enormous news of upcoming Pullip Cinnamoroll and Pullip Himawari. Takara Tomy though, announced a new Neo-Blythe cutie, called Majesty of Hearts. It is not surprising that her design is very ‘Alice in Wonderland’ inspired and reminds of the Queen of Hearts. I am one of those people, who will never get tired of the combination of the classic tale of Alice and dolls. I just won’t. Just like Sailor Moon, I feel rather lucky that one of my favourite things in this world, is not going out of style! 😀 I will be looking forward to her actual promotional images, but her design looks absolutely beautiful to me! She is planned to be a January 2018 release.

Are you having a nice festive season? Are you planning to give your dolls a special holiday makeover? Thank you so much for reading!