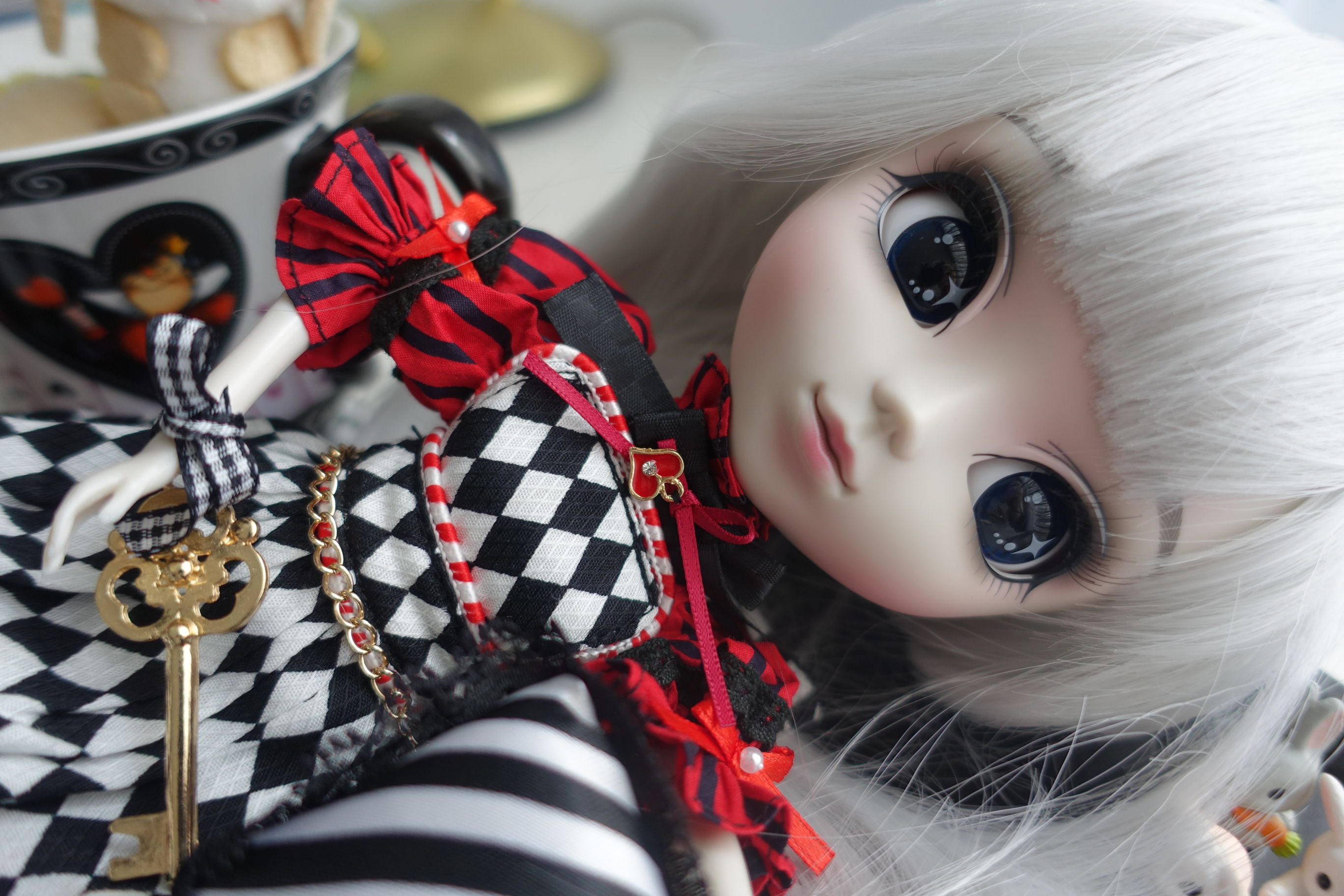 After waiting since the middle of November Optical Alice, the first doll of the Pullip Optical Alice Series, arrived yesterday at my doorstep. Optical Alice is also the first Pullip release in 2017 and continues Groove’s love for the story of “Alice in Wonderland”, after finishing Alice in Steampunk World with the release of Cheshire Cat last year.

The colour-theme of the Optical Alice Series is red, white and black. The patterns are inspired by classical playing cards, which can also be found on the box; next to keys, stars, books and other motives that are famous for playing a role in the tale. Even Alice’s cute chain-accessories can be found incorporated on the box.

Now let’s write about that face-up! First: Her eyechips are absolutely amazing! From some angles they appear to be pitch-black, only to reveal the deepest dark-blue edges that are totally worthy of getting lost in. The white accents make her eyes even stand out more and give her a cute expression.

Her make-up also surprised me. Her black eyeliner is drawn downward, giving her puppydog-eyes. There are no drawn-on lashes on her upper lid and quite subtle grey painted lashes on the lower lid that blend together with a bit of dark shading near the inner corner of her eyes. She has black lashes that differ in length, but have a very nice curl and accentuate her upper lid. Her lower waterline is white, which matches her eyeshadow that blends inwards into a metallic pink shade, which you can only see from certain angles. On its top it is blended with dark shadow that helps the white pop even more.

Here eyelids area pale grey with thick black eyeliner. She comes with the new eye-mechanism that was first introduced at the end of last year, which makes it possible to show off the black eyeliner on her lid, while her eyes are open. Though due to her dark eye make-up, it does not make her look a lot differently.

Her brows are black and sculpted-she seems to be really taking care of them. They are straight, detailed, suit her wonderfully and are a nice contrast to her wig. Her lips are as pale as her skintone at the edges, and pink and glossy in the middle. They give her a sweet expression. The shading/blushing on her face is very nice. The pink shading is on her chin, underneath the apples of her cheeks, at the outer corners of her eyes and between her brows on her forehead. It again gives her a very classical feel.

Her skintone is pale and ashy. I am by no means an expert in Pullip, so the only comparison I can make, is between Optical Alice and Nana-chan, who has until now been my palest Pullip doll. As you can see, Nana-chan’s skintone is brighter and not as greyish. It underlines how different the themes of both of these dolls are.

The colour of Alice’s wig can only be described as silvery grey. It is long, straight, shiny and soft. Very swishy with a lot of volume, making me really jealous. She has bangs that cover her eyebrows and also differ in length, which could have been messy, but works because they are again so full and voluminous. The wig cap shows on the crown of her head, but it is not too bad and barely noticeable.

That apron and dress! Exquisite and detailed; so beautiful! Please excuse my fangirling, but they did such an amazing job that I cannot hide my excitement anymore. I am looking at Alice and it is crazy: I find one new detail after another. Starting with her choker that incorporates a black bow that is structured like a chess board, a red bow on top with a heart pendant that has the tiniest rhinestone in its middle and is closed at the back with velcro; Alice also wears an apron that reminds me of a chess board and is structured in different sections by red and white bands. Red and white checkered straps that go around her shoulders, hold the apron in place. Around her waist, there is also a removable gold chain with a heavy dice and the same heart pendant from her choker-just in white. There is also a red and black ckeckered bow on the right side of her apron and black lace on the hemline. It closes with velcro on the back, where another bigger bow will surprise you.

I am beyond thrilled to have an Alice in a red and black striped dress! It goes all the way up her neck, reaching her chin in ruffles and making me ask myself, if it will stain someday. There is no plastic covering her body to prevent staining. Her sleeves are short and have ruffles as well, while being decorated with black lace, red bows and pearls. The same black lace can be found going down her bodice and near the hem of her skirt. Beneath the lace are also black bows with pearls. The hemline is greeting us with three rows of ruffles, the middle row breaking up the pattern by being out of dark-greyish cloth with black polka-dots. It is closed on the back with velcro as well.

She is wearing black and white coloured tights that go perfectly with her black and white platform heels that are the same design as my Alice du Jardin’s just without the rose at the front. Her headband is shaped like a bow , is also black and white and very soft like a pillow. It looks very satiny and shiny and is framed by black lace. The detailing in the middle looks so pretty: Under the black and red checkered bow, there is a golden crown pendant, which hangs right in the middle over a chain of white pearls and a gold chain underneath, that are sown on each side of the bow. The bow can be fixated on Alice’s wig by attaching the two black combs in her hair. Let me tell you: I have no idea how! When I try to attach it, it slides right of. Hopefully somebody will tell me one day and until then I will balance it on her head like a basket full of fruit. (Update: I finally got behind the secret thanks to Angela’s/Omocha Crush’s review!)

Alice’s final accessory (next to her card and black Pullip stand) is her golden key that she can wear as a bracelet. It is on a bigger scale than my lovely Alice, which let’s me believe that Alice is in her tiny form and trying to solve the puzzle.

Does Optical Alice have the key to your heart, so you will add her to your collection? I can assure you that she is worth it!

She is my third Alice doll from Pullip and I love how well these three cuties fit together!

Thank you for reading!