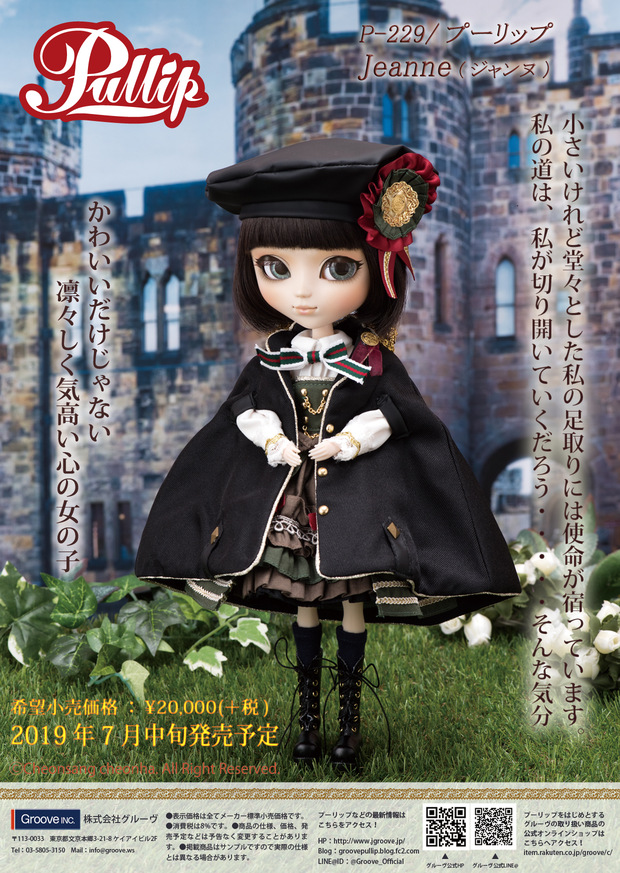 Ever since I have been collecting Pullips, there have been a wide variety of dolls in collaboration with Japanese fashion brands. With Pullip Jeanne the company is taking a new direction by releasing a girl wearing a military lolita fashion inspired outfit.

I honestly had no idea about this sub-category of Japanese lolita, but then it hit me: This is why I love Pullips and fashion dolls in general! They are a love letter to Japan and its fashion industry. And I am very grateful for every single thing they could teach me so far and hope that they will continue to do so! 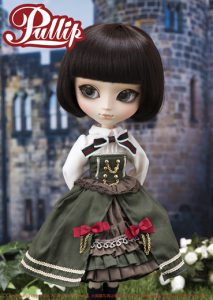 But back to Miss Jeanne, whose name immediately reminded me of Jeanne d’Arc, a plausible inspiration en lieu of her military background. What I especially love about her stock outfit is the combination of subdued colours, mainly a dark forest green, khaki and hints of different kinds of white lace. Furthermore golden chains and buttons – making two wine red bows the exceptional stars of the show. Jeanne’s white blouse is sporting more playful details (golden lace and another bow in white, green and wine red) and is adding to the seriousness of the military concept. 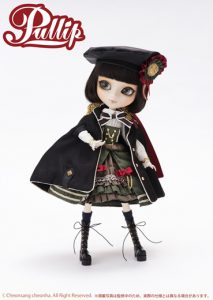 While the dress itself is quite playful, her coat is a little too serious for me, which doesn’t mean that it is not fitting to the concept. Jeanne is wearing a huge black cape, which, when worn, only leaves you with a sneak peek of her glorious dress. Its details are golden buttons, brassy studs and a huge wine red bow on the back. Last but not least, there is a golden epaulet on each of her shoulders, showcasing the importance of her rank, as well as a golden insignia on the left side of her collar.

To round up the look, she is sporting a black hat out of faux leather, which has the cutest ribbons in the front, matching her dress. 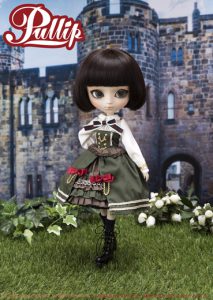 Her boots are the same black platform lace-up boots, which fans have seen on a lot of prior Pullip releases like Bloody Red Hood and Cheshire Cat in Steampunk World. 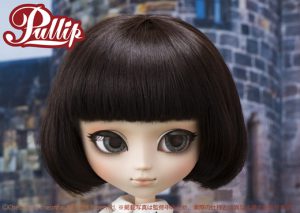 Face up time! Jeanne is wearing not a lot, but very impactful make up. She has one of those faces, who seem simple, but have delicate features – in this case we are talking about gorgeous black eyeliner with three flicks with lovely terracotta blushing and contouring finishing up the look.

I am also quite enchanted by her eyechips. It is always hard to tell from just looking at the promotional pictures, but those dark greenish grey eyes look stunning and intrigue me.

A few days ago, the AGA blog published more pictures of Jeanne in action with what appeared to be a new pair of eyechips. I do however, since my question wasn’t answered, believe that Jeanne’s stock eyechips haven’t changed. Still, the photographs are stunning and show us, how pretty she would look with another style of eyechips! 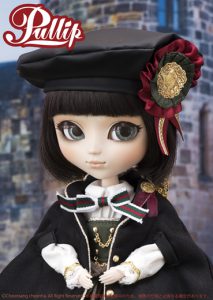 Jeanne’s wig is a very strict dark brown bob, which is reminding me of Pullip Kühn. The fringe completely covers up her eyebrows, which will be a nice mystery to be unveiled, once she is released.

What are your thoughts? Are you into Pullip Jeanne’s style? And what about her make up?

I am still having a hard time deciding, whether to go for her or not. Especially since I might love the clothes more than a girl, which sounds pretty counterproductive…and we must not forget the flood of new girls being announced – who will all get their separate blog posts, I am just super slow at the moment!

Thank you so much for reading! 💕 Theri

Disclaimer: All pictures of Pullip Jeanne belong to Groove Inc./AGA. (1)