Her oufit and colour-scheme revolves around red, dark blue, grey, gold, brown and black. Being part of a steampunk-series there are also quite a few brass elements in her stock.

The face-up is really well done. Cheshire Cat’s eyechips are a reflecting silver, which underlines her character as a cat perfectly. Her eyes are lined with black on the upper and lower waterline. On her upper lid she has black eyeliner, whose flick is facing downwards and gives this cute kitten puppydog eyes. There are no drawn-on lashes on her upper lid, only on her lower lid and they are also black. The eyeshadow on the upper lid is white and blended with grey towards the outside of her eye. On the inner half of the lower lid, there is a tiny bit of brown eyeliner and grey shading going towards the outside of the lid, infused with a subtle shimmer of silver. The inner corner of the eye is pink. She has black lashes.

Her eyelids are natural with black matte eyeliner. As mentioned in the first paragraph, Cheshire Cat comes with a new eye-mechanism that makes it possible to show her black eyeliner off, while her eyes are still open. I really like this look on her because it gives her the look of a kitty, who absolutely knows everything.

Cheshire Cat’s brows are brown and blended around the edges. They look, as if she used some brow pencil on them to get a lighter effect than her natural brow colour.

There is not much colour on her lips. A little bit of pink is to be found in the middle of her lower lip, but the rest of her lips is pale and glossy. To even out the paleness of her lips, she wears pink blush under her cheekbones, under her chin and blended around her eye make-up in the crease of her upper lid.

Bright cherry red is Cheshire Cat’s wig. The colour is fantastic and the star of the show, being brighter than her face-up and stock. It all forms a symbiosis that just works wonderfully. She has uneven, relatively long bangs in the front that cover her eyebrows and reach her lashes. On each side she has two strands that go down to her chin and frame her face. The rest of the wig is so long that it reaches her calfs and has a nice thickness to it. Things that do not bother me much, but that I feel I have to mention, are that the wig still (after three months) shedds a lot and that you can see the wig cap on top of her head. 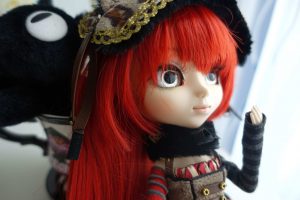 Her outfit is faboulously creative and versatile! On top she wears a corset that goes around her neck with two pleather straps that are closed with velcro. In front of her neck there is a golden chain attached on each strap that on her right side goes all the way down beyond the hemline of her skirt. It has a key pendant attched to its end. There are also two straps of pleather attached to the front part of her corset (being decorated with a gold element at the end of each side) and to the right and left side ending on the top ruffle of her skirt in a buckle and being decorated with three bronze studs on the way there. At the bottom there is golden lace going all the way around the back. The bottom part of the corset closes under her shoulder-area with velcro.

Under the corset she wears a vertically striped cream and red-coloured waist-long tube top out of satin. Below her top, Cheshire Cat wears a ruffly satin belt out of the same fabric that has a plushy black tail, which ends in a knot out of red and mostly black threads, attached at its back and closes with velcro. I have to say that I really enjoy her look, when she only wears the tube top and her high-waisted dark blue skirt that is out of a crepe material. It ends in three ruffles and is also decorated with a ruffly border in the middle. There was no plastic on Cheshire Cat’s body, when I took her out of the box and her skirt has already stained her body at the waist. It closes at the back with velcro. She comes with panties that are out of the same red and cream-striped fabric as her top and belt.

My most favourite accessory of hers is her headband with cat-ears. Its bottom is out of the same black plush as her tail and on each side she has two pleather straps, of which one each ends in a brass buckle and one each ends in velcro, which allows it to be fastened under her chin. On its top it is framed with the same golden lace that can be found on the corset and is lined with a fabric out of leopard print. The front of the cat ears are decorated with brass elements. There is one stud and a gear-wheel on the right ear and five studs on the edge of the left ear. The back of the ears are out of black plush as well.

Fitting her headband and tail, she also comes with a scarf out of black plush that can be tied around her neck with two black satin bands. There is a dice out of bronze brass sewn on to it and I basically always display her wearing it because it makes her hair and face pop.

Cheshire Cat’s arms are covered with striped arm warmers. Her right arm warmer has red and grey stripes, while her left arm has black and grey stripes. Her socks are out of the same fabric, only the colours are vice versa. Her boots are amazing black lace-up platform boots with gold accents. They are the same boots that Bloody Red Hood comes with and they are freaking awesome!

I could not help myself and shoot some pictures with Cheshire Cat and Optical Alice because both have key and dice elements in their stock. Even though they are not from the same series, they go really well together!

Cheshire Cat in Steampunk World is definitely a favourite in my house. My fiancé practically made me buy her because he loves her look. He does not even let me change her stock and that is coming from a guy, who is normally not that into Pullips at all (although I would not mind it). I can absolutely recommend checking her out because she is an amazingly detailed release that will spark your love for Pullip!

Someone knows, how to pose! 💃 Hitagi's video wi

Lluvia❣️ This beauty was created by my friend

Why is she so cute? 😭 Who is your favorite Mini

Happy Lunar New Year to everyone, who's celebratin

Slowly, but surely I am wondering, what she's look