Here we are, another week went by and there is no complaining on my side, since the last seven days were filled with enough dolly content to fill my post with! 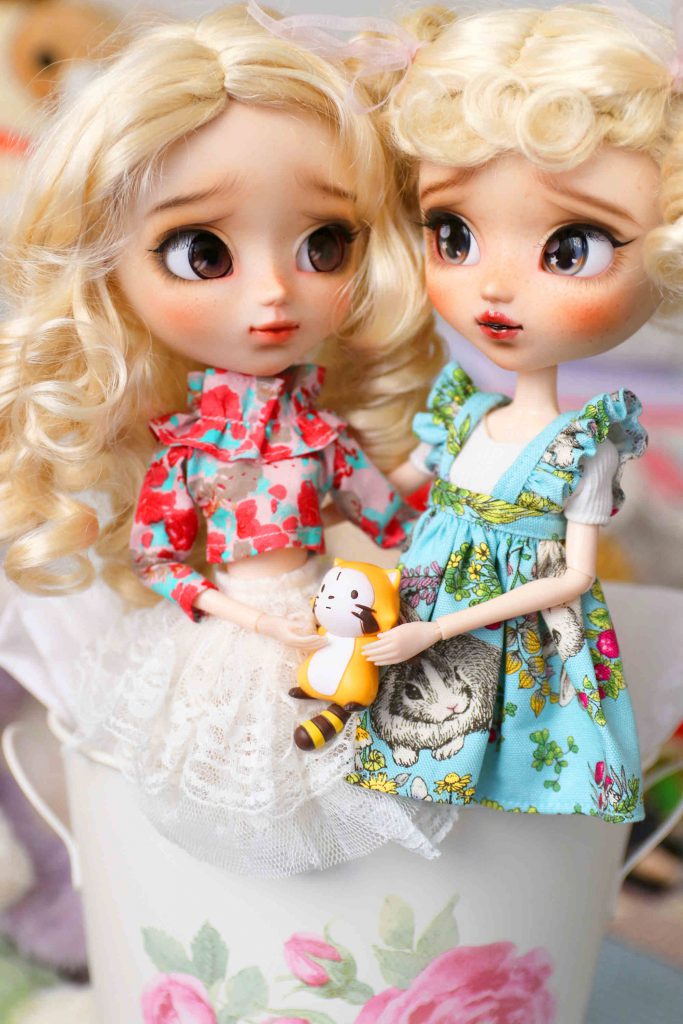 I turned 28 years old on Thursday and my husband managed to majorly surprise me by taking the day off. This way we could spend the hottest day of the year (literally, not trying to sound conceited) together and get to know these two little girls above: Claire and Choux, who both have been created by Thai artist Kitasin Doll House on Etsy. He gave the girls such sweet expressions that I named them after some of my favourite French pastries; Claire after éclairs and Choux after cream puffs. (And also: I knew that I would use this plant pot from Ikea for my doll photography one day, don’t ever let your spouse convince you otherwise! Ihihihi!) 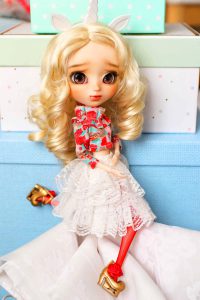 Even though you can easily spot both girls being from the same artist, I feel like their characters are quite different. Claire looks more grown up and has the air of a young lady. And here I thought that I would never be able to use Princess Rosalind’s stock highheels, but thanks to Claire’s elegance she can pull them off! Her top is part of the outfit she came with and her skirt is from Pullip Bonnie‘s stock. Kitasin was so nice to send me three pairs of his eyechips, including a purple pair with little stars, just like her sister’s. Do you think that I should change them, so that the girls could match? 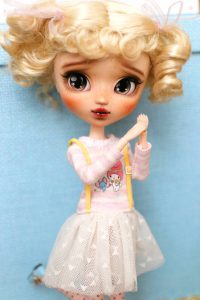 Choux, the little sister, is the first Pullip with teeth that I ever liked. In the past, whenever I saw a Pullip with teeth, they were not subtle enough for my liking and I could not ever imagine that they could look so adorable – especially with Choux’ adorable lips and expressive eyebrows. Her wig makes her look even younger, in my opinion! And speaking of wigs: I normally inmediately remove any ribbons from doll wigs, but in this case they are just perfect! She is wearing a dress by Suki Dolls above, which suits her kawaii personality. 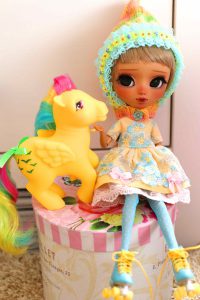 When I was finally writing my post about the anniversary rainbow ponies, I honestly just had this urge to photograph little Mia with yellow pony Skydancer because they look like they are meant for each other! Miss Button is a very pony loving little button now…and I did not even tell you that I got three vintage ponies for my mini collection. Two of them still need some special love, but they are so beautiful and so much fun! Mia is so cute in her helmet by It’s My Caprice; she deserves a portrait. The dress she is wearing, is my favourite dress by Dollily Studio and I am going to write a separate post to give her skates by SK Dollhouse the attention that they deserve!

News! Boy, did we get amazing news last week! I don’t want to toot my own horn (too much, hehe), but I called it last week, when I wrote that I was expecting the blonde Pullip girl, displayed in her Ladurée baker’s uniform, to become a full release, since this is how Groove was introducing a lot of girls in the last twelve months! Where I am still struggling though, is her actual name: She is a collaboration between Groove and Ladurée’s lifestyle line ‘Les Secrets by Ladurée’. I somehow had the impression that her name was going to be ‘Sucre’, sugar in French, which would be cute and fitting for her, but it seems like her name is Pullip Secret by Ladurée?! What a mouthful! 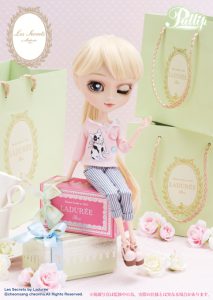 Is it surprising to anybody that I love her doggy shirt? I love it! Also, while I was comparing her to past releases like Pullip Ha-Ha, Eileen and Dahlia Cinderella; Virvatulia pointed out to me that her eye make-up looks a lot like Pullip Very Berry Pop, which was even more underlined with Pullip Jiyu‘s transformation of her VBP into Groove’s new release. Since VBP has been on my wishlist forever, I am not surprised anymore that I felt this immediate love for the Ladurée girl!

Speaking of love: I am still at this point, where I love Taeyangs, desperately want a bunch of them – and still always get distracted by Pullip. Now Groove has announced their newest Taeyang Hide, who is the 20th memorial version of Japanese rock star Matsumoto Hideto. This doll is nothing short of beautiful: Just look at his face up and amazing clothes! Groove is on a roll this year; I am almost immediately fangirling after each new announcement, but can there ever really be too much excitement?!

#Pullip /かや乃(kayano) is shipped out from our warehouse today. Overseas seller can get her within a few weeks.

Pullip Kayano has been released, which resulted in beautiful pictures of her and her packaging: What are those uber kawaii frogs doing on there?! I am looking forward to seeing more owner pics of her and her colourful self! Pyuriko on Twitter already made really pretty ones and answered my question, how Kayano would look like next to Pullip Prunella: They are practically sisters!

That only leaves me one thing to discuss, which is Groove’s new distribution policy, which basically relies heavily on pre-orders. Meaning, that Pullip Style and other Pullip vendors will mainly receive the amount of dolls being pre-ordered, instead of a certain fixed amount in the past, which allowed the vendors’ stock to last longer. So if you really love a new release or read about a pre-order being opened for an older doll, pre-ordering is your safest bet, since supplies won’t last as long as they did in the past.

What do you think about Groove’s newest announcements? Do you think that the Ladurée collaboration doll is too similar to past Pullip releases? Does Groove’s new distribution policy make sense to you? And the most important question to me personally: Should I change Claire’s eyechips to match her sister’s?