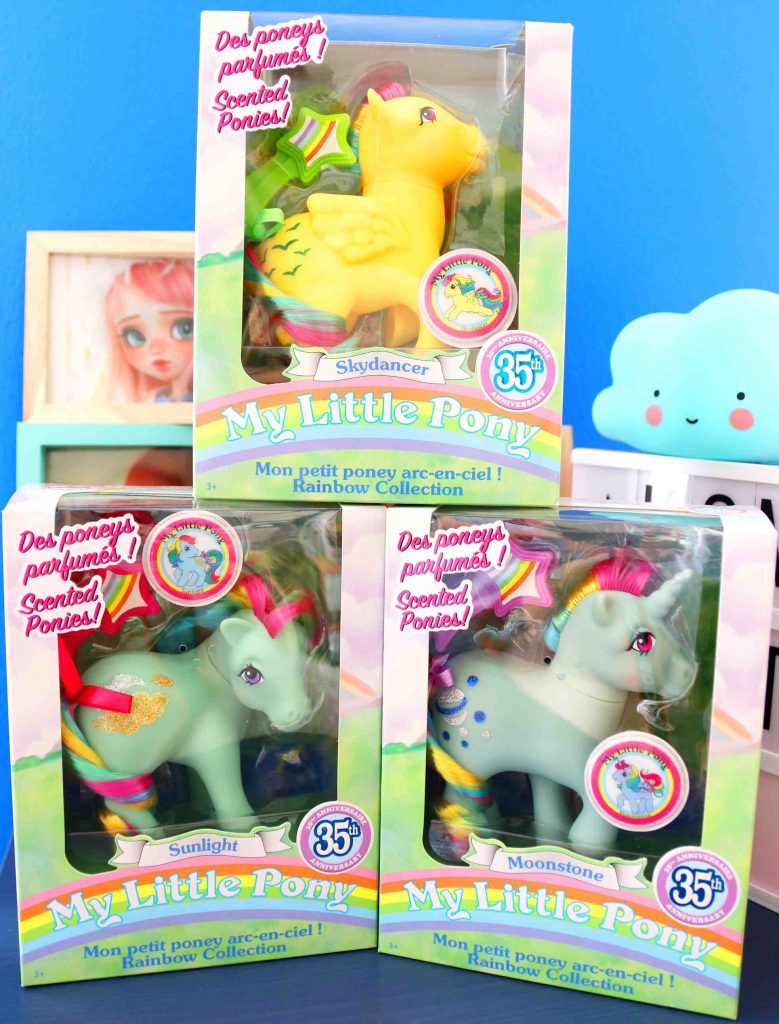 To celebrate the 35th birthday of My Little Pony, Hasbro released six replicas of their original first generation rainbow ponies. When it comes to My Little Pony, I prefer the first generation by far to any other (the contemporary ponies in the stores right now are already the fourth generation) because they remind me of my childhood. I only ever had two baby ponies, which let me stay in love with their original designs and let’s me cherish these original looking ponies as something truly special. I had to order my ponies from French retailer FNAC because they were only released in selected European countries. They are supposed to hit the US later this year, while the already in the US released anniversary earth ponies are supposed to be released in Europe around October. 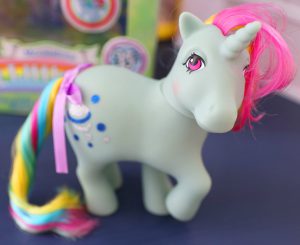 Out of the six rainbow ponies, I decided to get three. Pegasus ‘Skydancer’, earth pony ‘Sunlight’ and unicorn ‘Moonstone’. The characteristics of this collection are the name giving rainbow coloured manes and tails in pink, yellow, green and blue, sparkling cutie marks (the individual marks on their flanks) out of glitter and each pony has its own scent. Their manes have lots of volume, which I hope will flatten out in time (it is a bit too 80ies for me), and their tails are long and have a lovely curl to them. You can turn the ponies’ heads, but I think the look of it is too odd and I am not liking it at all. Additionally to the awesome ponies themselves, you also get beautiful vintage packaging with the original accessories, a comb, a brush and a sticker, and first generation artwork in the back, which shows the rainbow ponies frolicking on a meadow. 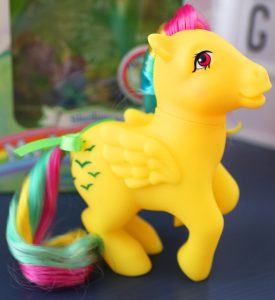 Skydancer is the yellow pegasus of the collection. Her pose is named after Firefly, who was the first pony to be released in this mould. (In general, the ponies’ poses are always named after the pony who was first released in it.) She is wearing a grass green ribbon around her tail and her cutie mark consists out of various silhouettes of flying birds in dark green glitter. This pony’s eyes are hot pink, her cheeks are a subtle peach and she smells really nice. It says on the back of her packaging that she is supposed to have an apricot scent and while I could not figure out the apricot notes by myself, she smells by far the frutiest out of my three cuties. Her comb and brush are as grass green as the ribbon around her tail! 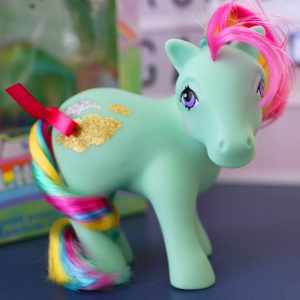 I did not even think twice about getting Sunlight because I really wanted a turquoise coloured pony – only that Sunlight is not turquoise at all, but rather a greyish mint green. She is a so called earth pony and she is sporting the Bow Tie pose. Sunlight’s cutie mark are two golden and one silver cloud. Her eye colour is a lovely lavender and there is a hint of pink blush on her cheeks. She is supposed to smell like apples, which I thought was a light coconut fragrance. Whatever it truly smells like, I like it! This pony is sporting hot pink accessories. 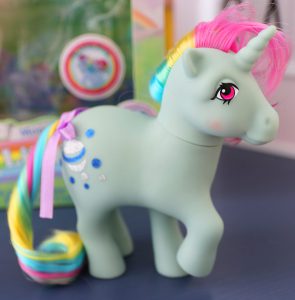 Moonstone, my unicorn, surprised me the most because I did not like her too much from the promotional pictures and she turned out to be one of my favourite ponies of all time! She is just amazing! Her pose was originally used on fellow unicorn Glory and just like with Sunlight, I was expecting her to be blue, instead of a grayish moss colour. At first, I was contemplating, whether I needed two blue ponies, but as it turns out, both are actually green! The cutie mark matches her name with lots of moon stones circling their planet saturn in indigo blue and silver glitter. Moonstone’s eyes are hot pink and hers are more neon than Sunlight’s, which looks very nice against the more subdued green. She is also wearing the most blush out of the three and it matches her eye colour, while she is wearing her raspberry perfume and she does smell fruity. She also is the pony with my most favourite accessories in cute lilac!

I cannot even tell you, how much I am looking forward to the second batch of anniversary ponies after seeing how cute these rainbow ponies have turned out! They are perfect for toy collectors that have a sweet spot for toys of the 80ies and 90ies – the only critique that I have is that they are hard to get a hold of and that they do not come with a poster like the anniversary earth ponies do. The first generation artwork is just too cute and this is a real missed chance for fans. Nonetheless, seeing these cute ponies rereleased is amazing and sparked my love for them even further!

Do any of you plan to add some of the anniversary ponies to your personal collection? Or are you so lucky to still have some originals in your possession? Talking about and discovering new ponies is so much fun!