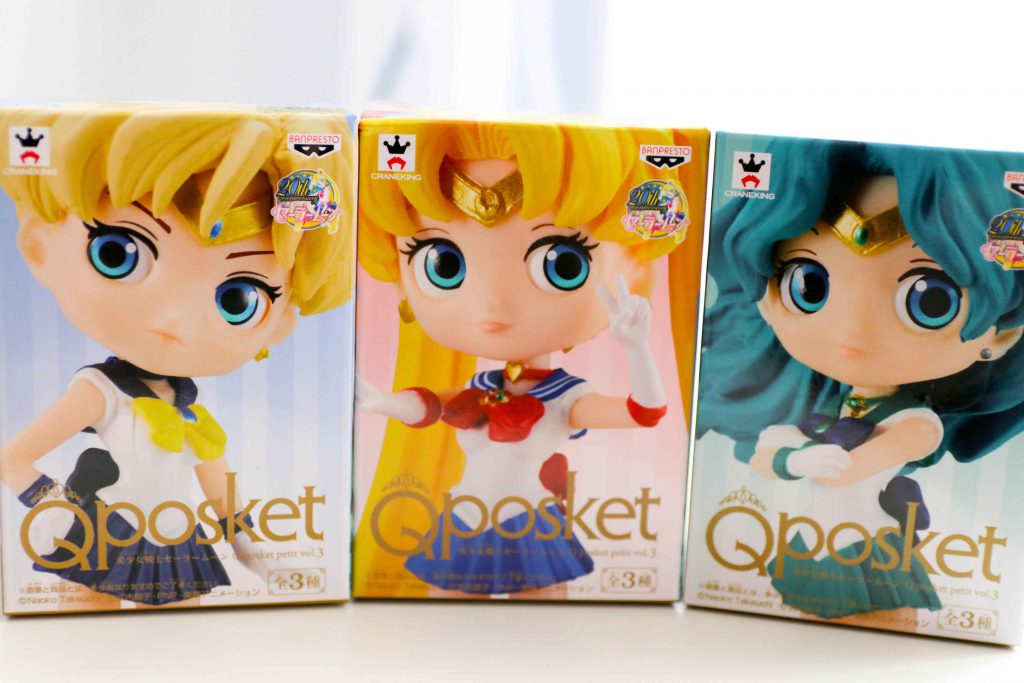 Last December I remember running around Tokyo to find the newly released Qposket Sailor Moon set including my favourite outer senshi Sailor Neptune. You might have already read my review on her Pullip doll or seen my past collection in an Instagram post, so it should not be a surprise that I was beyond happy to have found the whole set nine months later in a secondhand store in Akihabara (which still remains the only time I have spotted it since then). The prize was pretty reasonable with 2980 Yen and I should also mention that, just as my Rapunzel figure, those figures were prices in crane machines in Japanese arcades. Let’s get started with some Sailor Moon cuteness! 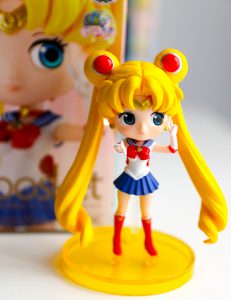 Even though I wanted this set mainly for Sailor Neptune, the figure of Sailor Moon is my favorite! Her face looks the cutest to me, her mouth the poutiest and her pose the most iconic. The biggest surprise are the decorations in her dangos, which have a lovely orange red sheen. Her hairstyle in general looks lovely and also the metallic sheen of her jewelry is stunning. For a smaller Sailor Moon figure, I am so surprised by the quality and accuracy. Her face is very peachy toned and she has the prettiest greenish blue eyes. She also comes with a clear yellow stand, which also supports her head in the back. 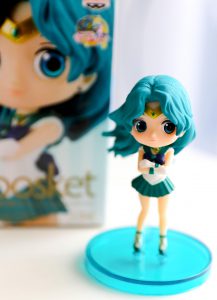 Sailor Neptune is a tiny vision in sea green, as she should be! She does not have as much color in her face as Sailor Moon, very pale lips and subtle blushing. That’s probably why her sea green eyes are so prominent, when you look at her face. Her pose is super accurate to the character, as are her hair, sailor suit and shoes. I love this little wide-eyed Miss! Her hair looks, as if the wind is blowing through it, which is a nice effect. She comes with a clear sea green colored stand and in the back it is designed to hold the waves of her hair in the back. For some reason, I think that detail is just so hilarious: Sailor Neptune is so high maintenance that even her stand was custom made for her hair! 😀 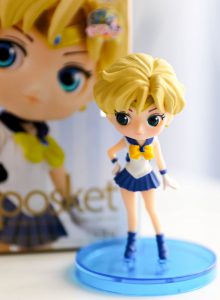 I am having a few problems with Sailor Uranus. Not, when it comes to her design, she is gorgeous! Until now, I did not mention that you have to assemble these Qposket Petit figures yourself. You have to stick their heads onto their bodies and with Sailor Uranus I constantly get the feeling that something about her posture is off. Either this or her head is wobbling around on her neck. Nonetheless, I love her fierce looking face, which has a little more color than Sailor Neptune, and no less fierce pose that she is known for. Her ash blonde colored short hair looks amazing and caught by the same breeze as Sailor Neptune. Her eye color is indigo blue and she is the only one of the girls with only two eyeliner flicks. She comes with a clear dark blue stand and it is also supposed to support her head in the back, which is not quite working for my Sailor Uranus because of the before mentioned issue. But it’s not the end of the world or would have prevented me from getting her! 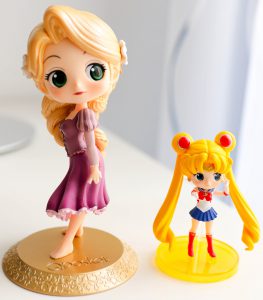 I also wanted to show you a size comparison between the full sized and Petit Qposket figures. As you can see, it is pretty much like night and day. Dainty little Rapunzel looks massive next to her little sister! I also threw in a picture of a Qposket Petit Sailor Neptune next to a Petit Chara! figure, which is way more chibi looking and even smaller.

What are your thoughts on those smaller figures by Qposket? Do they also remind you of Blythe dolls?