One of my most favourite things, when visiting Japan, are the numerous theme cafés that always seem to be popping up all around the large cities and often only for a limited amount of time – even though I have noticed that some locations seem to settle down permanently, when their characters are established enough! Permanent locations allow the decor to be more special with more love to detail, while the temporary locations often have to work with more simple approaches. When it comes to the food though, you are allowed to expect greatness, no matter the location’s longevity: Detailed dishes and drinks that are so cute, it is often hard to dig in right away!

My experiences with theme cafés started, when I first visited Japan in September 2012. It was in Shibuya in my favourite location to browse for new music: Tower Records (where I also discovered K-Pop, but that is another love story)! It was before I had allowed myself to embrace otaku culture, so I had no idea, who Hatsune Miku was or why the Tower Records Café was dedicating a whole menu to her. I still cherish the ‘No Miku, No Life’ (taken from Tower Record’s slogan ‘No Music, No Life’) coasters to this day! 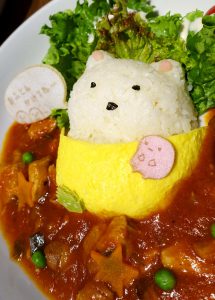 fter missing Japan for a few years, I finally got to go back, this time with the full intention of visiting theme cafés, having finally embraced my love for anime and Japanese character goods! It was in September 2015 and I fell in love with SAN-X’ character line ‘Sumikko Gurashi’, a bunch of shy hamster like cuties that I still adore to this day and who have celebrated their 5th anniversary last year! By sheer coincidence, Tower Records Café was having a collaboration with Sumikko and the experience was amazing! Apart from being an amazing location to hang out in between browsing for music, magazines or merchandise, I highly recommend you to check out Tower Records’ store in Shibuya for their regular collaborations in their café: Have a quick look here on their Instagram before you visit!

In the past there used to be the prejudice that cute food in theme cafés looks better than it tastes, but last September I often ventured out to try cute food in Tokyo to prove that this is not the case anymore – let me show you, what I have experienced! 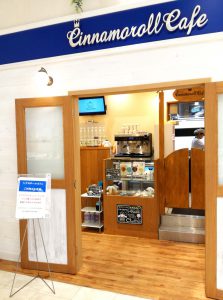 I love Japanese department stores! Imagine a huge complex filled with all the things you could ever need, including eateries and places to enjoy yourself even more like cinemas, arcades or even theme parks. A place, where I love to shop and spend time, is Shinjuku’s Marui Annex building. It is also the place, where the permanent Cinnamoroll Café opened up last year on the ground floor. Its design is super cute with lots of wood and Cinnamoroll detailed interior. Everything is very kawaii, but also has a modern feeling, which starts with the cursive ‘Cinnamoroll Café’ logo and its navy blue background, which is an interesting choice, since you normally associate Cinnamoroll with pastel baby blue. 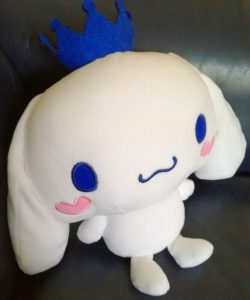 As soon as you walk in, you also enter the café’s store with exclusive merchandise. I went to the café on a Monday and most of the exclusive goods were sold out. When I went by the next day, all the plushies had been restocked and this is how I got my most favourite Cinnamoroll plushy. It is the softest plushy ever and I love his navy coloured features and crown and his heart shaped cheeks. I absolutely recommend you to squeeze it, when you have the opportunity to!

Apart from the amazing ambiance, the food and drinks were super delicious! We skipped the soda and main dishes for coffee and desserts, which were so yummy that I need to try out more this upcoming December! Their presentation did not disappoint either, their ‘Espresso Con Panna’ arrived full mustache style with a big chocolate mustache on top of the mountain of cream and even Cinnamoroll’s friend Mr.Espresso himself being pictured having a tiny mustache on the complementary (and yes, delicious) marshmallow! As a sweeter alternative we also got ‘Coco’s Mischievous Capuccino’, which had a Coco themed marshmallow on top and a sprinkle of nuts. If you are surprised by how many characters there are in the Cinnamoroll universe, let me assure you that I had no idea either and had to do some research before writing this post! >< There are just so many cuties! 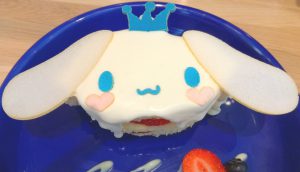 The sweets are phenomenal! We were having ‘Chiffon’s Berry Berry Parfait’ and ‘Cinnamoroll’s Special Shortcake’ and both were amazing! I honestly could not tell you, which one I prefer, although I have to admit that the cake does look a little more extravagant and, as the name already suggests, special! It was my first time eating a Japanese parfait, which consists out of various layers of delicious treats. I enormously enjoyed the combination of cornflakes, ice cream and whipped cream! 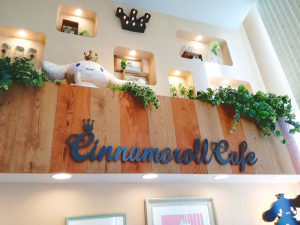 Upcoming December I definitely want to try out their main dishes, especially the ‘Good Night Omurice’, where little Cinnamoroll is sleeping under an omelet blanket, and I am also intrigued by their pretty looking sodas! Click here for the café’s official website – it is mainly in Japanese, but you can see cute pictures of the food, merchandise and decor. We had no problem to get a table right away during the week, but I am sure that it is way busier on the weekends (especially since their store was practically empty on a Monday)! 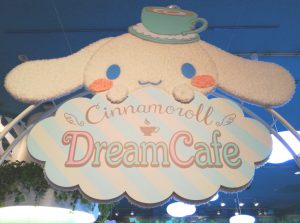 There are many opportunities to eat cute food in Sanrio Puroland, Tokyo’s Sanrio indoor theme park, but as a true Cinnamoroll fan, my dreams came true in the Cinnamoroll Dream Café on the fourth floor! In the summer of 2017 you could find cold jelly soda on nearly every corner in Tokyo and this café was no exception: Your soda arrived with lots of navy blue jelly and a cute Cinnamoroll marshmallow on top! The same marshmallow made a reappearance, when I decided to eat an actual Cinnamoroll themed cinnamon roll, fittingly called ‘Cinnamoroll in the Sky’. It tasted so nice, fresh and delicious! And I loved the taste and look of the blue icing – it was literally heaven! 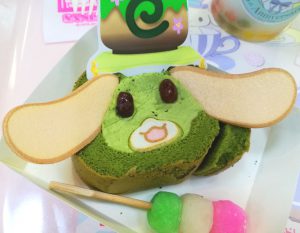 My husband’s dessert made me laugh: There was a special promotion going on, which featured all of the characters in traditional Japanese summer clothing (yukata) and my husband picked out one of their seasonal treats: A matcha sponge cake with dango on the side. Doesn’t it kind of look super scary? XD Nonetheless it tasted delicious!

The Cinnamoroll Dream Café has its own page on the Sanrio Puroland website, click here to access it! I remember that it was nearly impossible to get a seat right away, so definitely plan ahead, if you want to visit!

In Ikebukuro’s SEIBU department store, there are often pop up cafés on the building’s eighth floor, right next to all its other restaurants. Last September we were so lucky to be able to visit the Sumikko Gurashi 5th Anniversary Café by pure chance and to this day I feel so lucky that I have visited a temporary Sumikko café twice now! This particular café was actually so popular that you had to get reservations at a certain time slot to even be able to visit. Our slot was late at night, which was fine for us and even though it was late, none of the dishes or beverages had sold out. 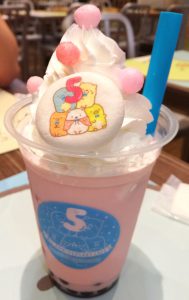 Ordering was quite the challenge because everything was so fantastic looking, even the drinks! You could choose between sodas and milk shakes. ‘Neko’s Mango Soda’ came with a straw that had a carton with Neko’s nose and mouth attached to it, basically turning you into a cat yourself while drinking. It was such a cute idea and a lot of fun for taking pictures and making memories! We also tried the ‘Strawberry Milk Tapioca Drink’ – Tapiocas being characters of the Sumikko Gurashi universe – and it was one of the best milk shakes that I have ever had! The presentation was top notch too and by now it should not surprise anybody anymore that I love complementary marshmallows! XD 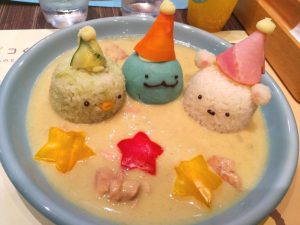 The ‘Heavenly Sumikko Party Curry’ featured characters Pengin?, Tokage and Shirokuma with them all wearing party hats, while floating in delicious curry sauce. The details were amazing and it is always hard to dig into something that cute! 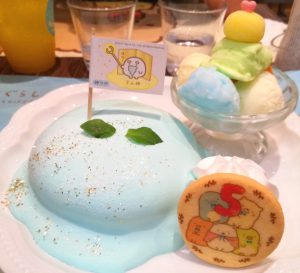 For dessert we had ‘Sumikko-sama’s Anniversary Pancakes’, which, considering that Sumikko-sama is the God of the Sumikko Gurashi universe, completely surprised us with its exuberance in size and deliciousness! Imagine soft and fluffy pancakes under the milkiest cream that I have ever tasted, also being a visual feast with its pastel turquoise colour with golden flakes on top. And on top of that, there even was ice cream on the side, as well as some cream and anniversary cookie! I tell you, I still dream about this dessert to this day – that’s how tasty it was! 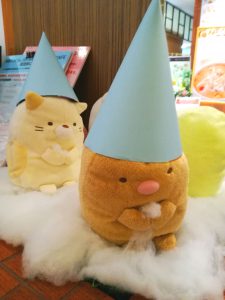 Ikebukuro is such a popular location for theme cafés that I highly suggest that you visit this part of Tokyo, which is also my personal favourite! You can check out the SEIBU department store in Ikebukuro here and maybe there will be a lovely theme café on the eighth floor, while you are in the area!

There are so many cafés more that I want to visit, a few of them being the Moomin Café next to Tokyo Dome, the Pompompurin Café in Harajuku, the One Piece themed ‘Mugiwara Café‘ at Tokyo Dome and the Gudetama Café in Osaka, which are all permanent businesses! I will also keep my eyes open for pop up cafés – a dream of mine being to finally be able to visit a Sailor Moon themed café!

Have you ever visited a theme café? Do you have any tips for locations that I should go and visit at the end of the year? And who is your favourite Japanese character in general?

4 thoughts on “Why You Should Visit a Theme Café in Japan! Featuring Cinnamoroll & Sumikko Gurashi!”