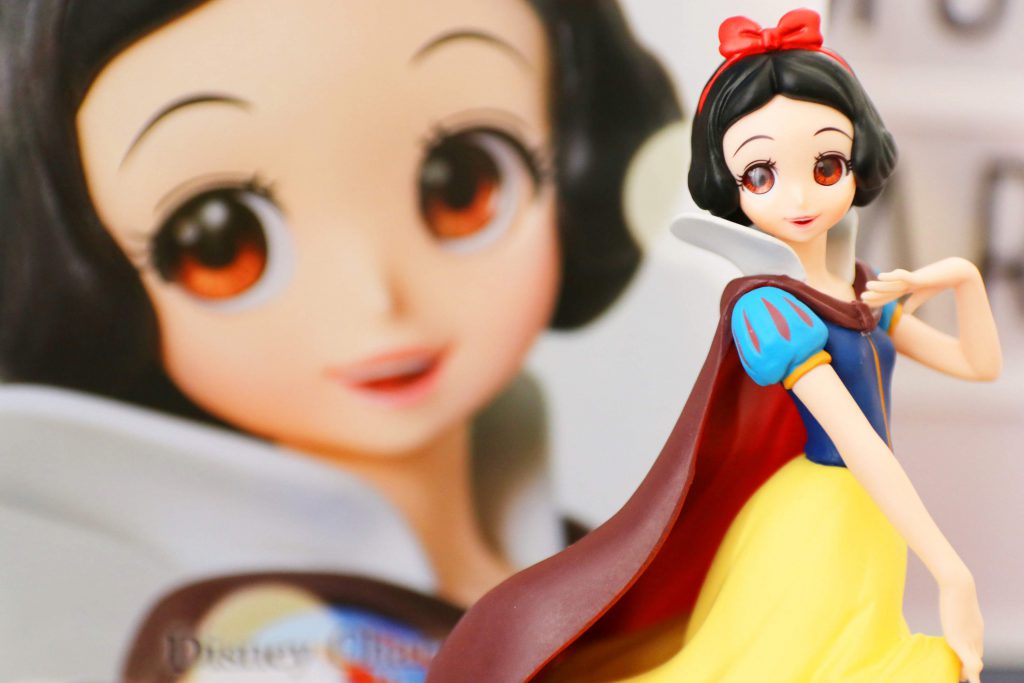 She is here! Crystalux’ second figure release is Disney’s Snow White and I have been looking forward to her for a few months now. Crystalux figures can be won in Japanese arcades and it has already been announced that Belle from ‘The Beauty & The Beast’ is next. She will be released in June and yours truly already pre-ordered her! 😉 But first, let’s give beautiful Snow White the attention she deserves! 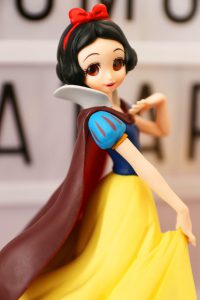 The main feature of the Crystalux series, are the eyechip-like eyes, which give the eyes more depth and reflect the light. Snow White’s eyes are a slightly reddish medium brown. Her face is phenomenal: Beautiful, cute and very much like the original character! She basically looks like she is right in the middle of singing with her mouth being open and smiling. You can see her upper row of teeth and her lips are a light salmon pink and a very lovely shape. There is some subtle blushing on her cheeks, but that’s it for her make up. Her lashes and eyebrows are black. Just as beautiful is her short bob with curly ends and that cute cherry red bow on top! 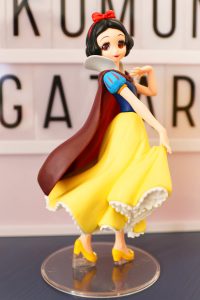 Her outfit is the classical dress out of the movie with the big white collar, red cape, yellow skirt, dark blue bodice and medium blue puffy sleeves with red and golden details. It is such an iconic dress, I could not imagine classical Snow White any other way! The figure is even so detailed to make the white petticoat under her dress really pretty and voluminous. 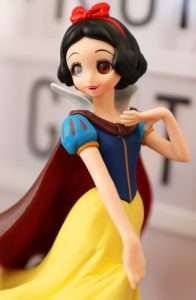 Which brings us to her pose: Do you remember the scene, where Snow White and the dwarfs are having a party, are making music and are dancing? This is, what this Snow White is reminding me of! Her head is turned to the side, while she is lifting up her skirt with her right hand and taking a step forward. I also really love her left arm and its elegant gesture towards herself. We are talking about a real princess! 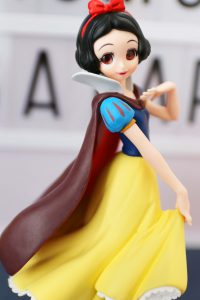 There also needs to be a shout-out to the cape and how amazing it has been made to support the look of Snow White’s movement! Where the skirt of the dress has a visible dent in the back due to the princess walking forward, you can see that the cape has its own shape, just like it would in reality! I probably should not be that impressed anymore by how much thought goes into these figures, but honestly: Where I come from, you can either dream about this level of detail or pay lots of money! 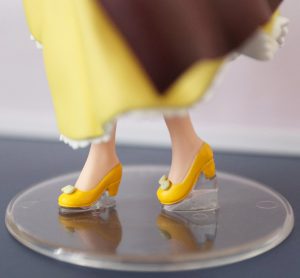 Snow White’s shoes are so cute! They are yellow pumps with light yellow bows and are just as iconic as her outfit! She is standing on a transparent stand, which is shaped to support her shoes. It is very subtle without any logos and does its job!

What more could I say than that I absolutely love this figure! The design is amazing and detailed. I even love her more than Alice, which was the first Crystalux release. Click here to read my article about her! I honestly hope that there will be many more future releases of more of my favourite Disney characters!

Are you a fan of Snow White? What are your thoughts on her interpretation by Crystalux?