Pokémon Little Tales is a yearly collaboration between the Japanese Pokémon Centers and Japanese artist Shinzi Katoh, of whose cute style I am a big fan. He also collaborated with various different popular companies, for example Disney. I ordered this year’s couple plush from Ebay and it arrived a few days ago.

tremendously cute! The girl Pikachu with her cute heart-shaped tail is wearing a red scarf with a tiny red bow and a pink flower out of felt on her head. In her hand she is carrying a huge felt blueberry. I have never ever seen such a gigantic blueberry before, but at the same time it’s not as if I’m all knowing.

bag out of felt. In his bag, there is a tiny surprise in form of a big red berry or apple or tomato (out of felt as well). I really cannot tell at all. Both Pikachus have such cute faces with their shiny black button eyes, heart-shaped noses and w-formed mouths. This cuties also have fresh pink cheeks, which is a detail that I also loved on last year’s couple. 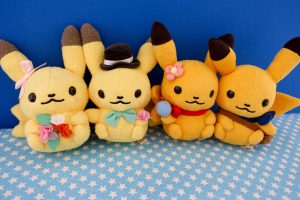 In 2016 the Little Tales series had a pastel-colored theme, which you will instantly notice in the picture above. The newly released plush has a quite orangey tone, while the tone that was used in 2016 was a soft pastel yellow. Also the top of their ears is black, while last year the color to go with the pastel yellow was a light brown.

Their faces pretty much stayed the same and hopefully will continue to do so in coming years. Last year’s girl Pikachu is wearing a pink bow on her had and is holding a bouquet of white, pink and red flowers. The flowers are made out of tulle. 2016 boy Pikachu is wearing a black top hat with a light grey ribbon on his head, a mint colored bow tie and a pink flower out of tulle.

They look so good together and I am really hoping that there will be another Pokémon Little Tales collaboration next year. What will their next tale be about?! Do you prefer last or this year’s couple?