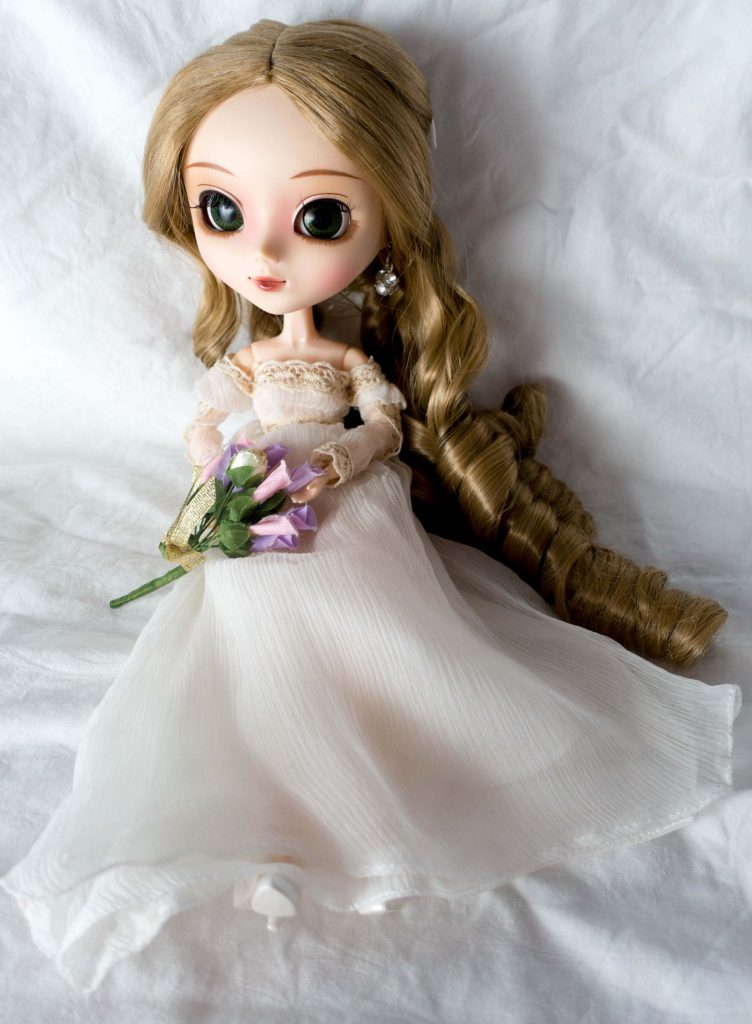 Some time ago, Pullip Blanche’s face appeared on my computer screen and her beautiful face immediately struck me. At that time I had no idea, who she was and so my search for her started. Turns out, she was released in 2007 when Pullip was still produced under Jun Planning and not Groove. She is on a type-3 body and, being ten years old, pretty hard to find due to her still ongoing popularity in the Pullip community. I was lucky to get her NRFB and in mint condition, although type-3 bodies are prone to breaking, especially their fragile wrists. 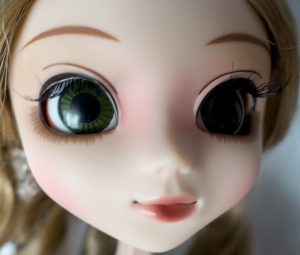 Blanche’s eyechips are not of the plastic kind, we are used from newer releases, but out of rubber. The biggest difference is that they have way less shine to them and almost seem matte. Her eyecolor is a dark olive green, which almost entirely blends into her black pupils. Another difference from newer releases are her eyelids, which you can close, but will not stay shut on their own. They are a light brownish nude color with dark brown liner and look, as if they were glazed over. I would say that they suit her overall make-up look pretty well! 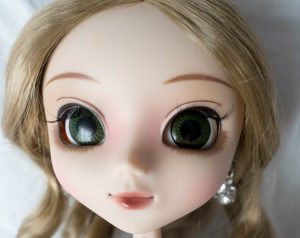 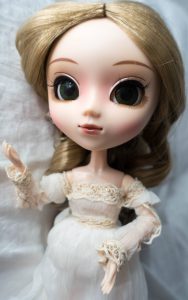 Speaking of which: Blanche is wearing everyone’s neutral make-ups dream! Those earthtones on her are breathtaking and beautiful. It starts with her straight medium brown brows, which look very in place and perfectly plucked. Her eyemake-up is quite subtle with her waterlines being rimmed with dark brown eyeliner. She does not have any drawn-on lashes on the upper lid, but a lot on her lower lid. They are very thick in different tones of light and medium brown. She is only wearing a tiny bit of pinkish white eyeshadow on the inner half of her upper lid and the inner corners of her eyes. Her crease is accentuated with a simple dark brown brush stroke and there is a subtle dark brown shadow right above it. The blushing is exquisite: It is a dark rose color with a hint of brown, which is dusted starting at the inner corners of her eyes going down to the left and right of her nose and under her cheekbones. I love those lips so, so much! They are painted in a rosy brown, which looks so modern and the shape is so cute, as if she is pouting. The color is also fading out in a nice way around the edges, which supports her lovely expression. 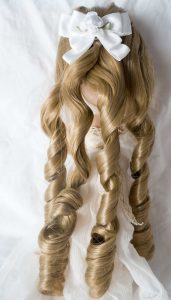 Blanche’s shiny dark blonde wig is pretty decent, when you consider for how long it has been sitting inside of the box. Some parts feel a little dry and the curls are a bit frizzy, but otherwise there is not a lot to complain. This is my first stock wig with a middle parting without the wig cap showing. She is sporting five big and long curls in the back, where you are also supposed to put her white hair bow, which has a white rose out of fabric in its middle. 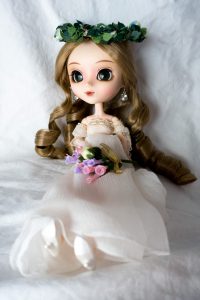 But we are not done yet with Miss Blanche’s accessories, which all hint to her being a bride (another hint is her name, which means white in French). She has a flower crown out of dark green plastic ivy leaves with white fabric roses and interwoven white and gold lace. Let’s just say: It did not stand the test of time! It feels super dry, easy to ruin and balances on her head, as if she is doing exercises to improve her posture.

Amazing on the other hand are her pretty metallic golden earring with lots of faux diamonds. Some of them were unfortunately loosely sliding around in her box, but be assured that they are all safe and will be reglued in place! 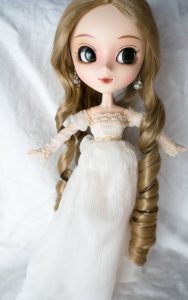 Blanche’s dress is so beautiful and definitely secured a place in my list of favorite stock dresses. It is an off-shoulder empire dress with long sleeves. The main fabric is white chiffon, of which the skirt has three complete layers. It is sectioned by pieces out of cream and golden lace, which make her look like a princess. The dress closes in the back with two press studs and it also has a bow there, which is really cute!

I am not keen on showing Pullip’s underwear, but she is wearing fancy lace panties and a garter belt out of the same cream and golden lace. It is a small detail, but a very thoughtful one for a doll with a bridal concept. This also includes her bouquet out of pink, lilac and one single yellow flowers out of fabric, which are held together by a piece of golden ribbon. Blanche’s bridal shoes are pearly metallic white heels and they complete her look perfectly! She is just such a pretty doll!!! 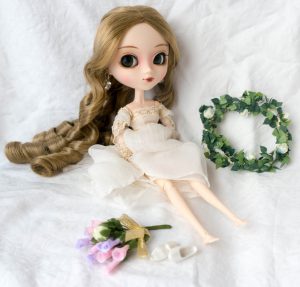 What are your thoughts on Pullip Blanche? Are you as enamored with her look as I am?