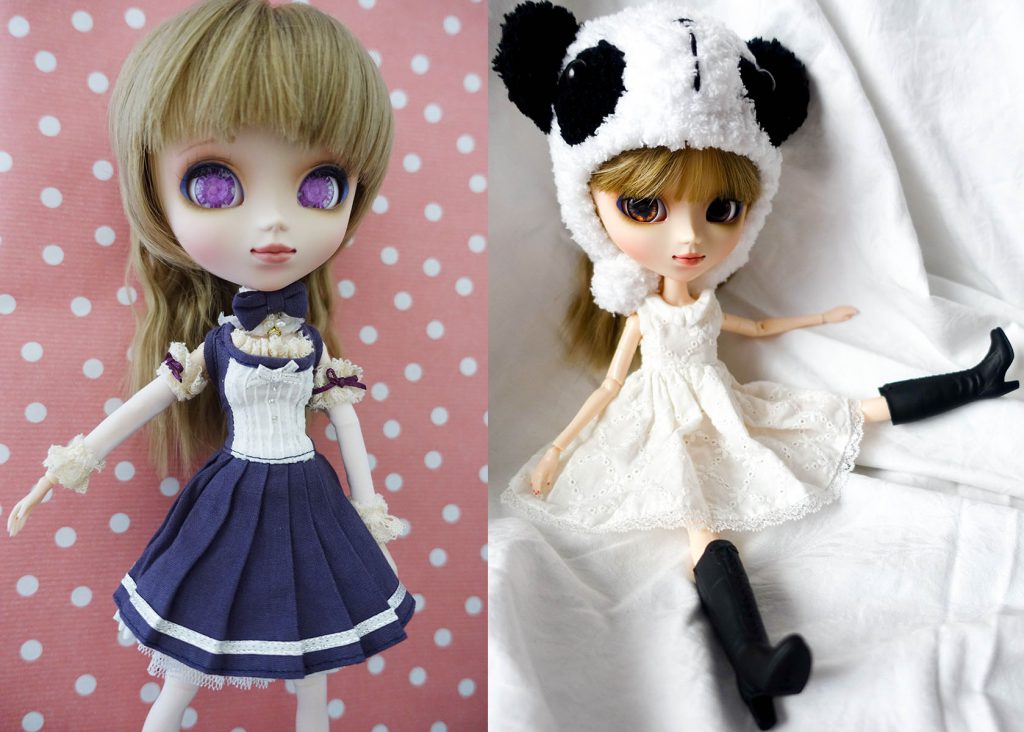 Are you a Pullip customization rookie, but would like to change your doll’s eyechips? Deal! We are in this together and I wrote a simple list, you can follow. It is not easy at first, you might sweat and swear a bit, but in the end it will be absolutely worth it! 🙂 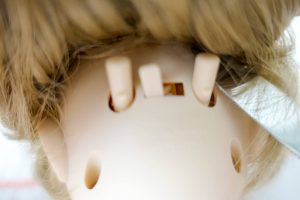 This is the easiest part: Turn your doll around and look for the wig cap at the back of her head. Grab a normal butter knife (works just fine and you won’t cut your doll or your hand) and start to loosen the glue under the wig cap. After a while, you will be able to remove the whole cap by simply tearing it from your doll’s scalp. 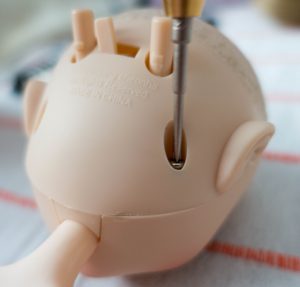 Once you have removed the wig, you will see that there are actually a total of three Philips screws at the back of a Pullip’s head. You need a slender screwdriver to remove them and afterwards you will be able to open the head. Voilà! 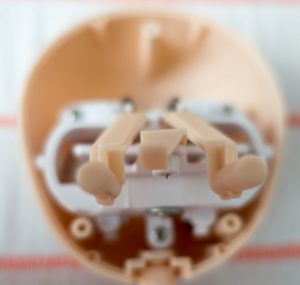 When you opened the head and are looking at the eye mechanism, you will see three flesh colored levers. The top two of them are just loosely lying in there and you can put them to the side.

Remove the eyelids’ springs from the mechanism!

The only thing that attaches the eyelids to the eye mechanism, are two tiny silver springs that go around tiny ledges. Just slip them off those ledges and you are good to go on to the next step!

Unscrew the screws that connect the eye mechanism to the faceplate! 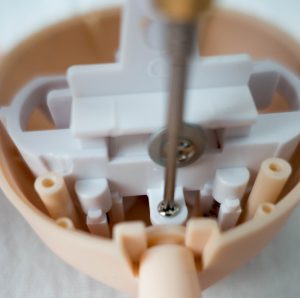 There are three more screws that have to be unscrewed, which should work with the same screwdriver, you have already used before. Afterwards you will be able to take out the eye mechanism on its own, while the eyelids will remain loosely on the inside of the faceplate. 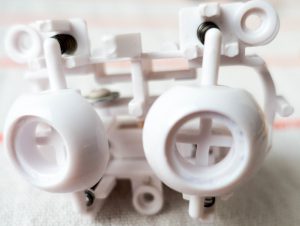 Stock eyechips are normally glued into the eye mechanism. When I was doing my research on removing plastic eyechips, it was suggested that you could use either pressure from behind or cut them out of the socket with an exacto knife. In the end, applying pressure with a wide dull screwdriver worked for me (for example torx), but it was pretty grating. If the eyechips won’t come out, ask the person in your household, who is the best in opening jars. They will get the job done. (Or you are better with an exacto knife, I made a few tiny scratches and ditched the idea. Seriously, I have no idea, how you should use the knife without completely destroying the eyechips.)

The stock chips of Pullip Lupinus have a clear plastic chip on the outside and a purple flower out of fabric underneath and the back of the eyechips are covered with white paper, which will be destroyed when you push it out from behind. One of the clear chips also got a little bit damaged, which is a shame, but I knew that some stock chips will break due to their amount of glue.

Put the new eyechips in the empty sockets of the eye mechanism! 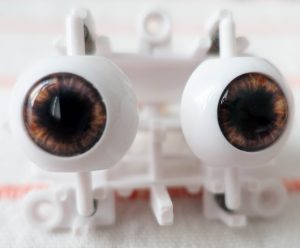 I was lucky and Lu’s new Chewy Rabbit eyechips stayed inside their sockets on their own. If that’s not the case, you can use a little bit of glue at the outer edges on the back of your eyechips.

Check the loose eyelids inside of the faceplate! 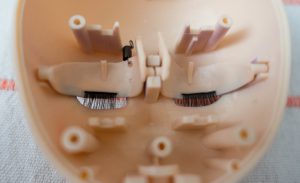 Especially take care that the little springs on top of the eyelids are facing up, so it will be easier to put them back on the actual eye mechanism.

Screw the eye mechanism back onto the faceplate!

Now it is time to secure the three screws from the eye mechanism onto the faceplate. Make sure that the springs in the front of the mechanism are under the white plastic.

Reattach the two springs of the eyelids onto their ledges on the eye mechanism!

This can be pretty tedious, but it is easier, if you grab the spring with a pair of tweezers and pull it towards its ledge, where it has to be fastened.

Put the two flesh-colored levers  back, where they belong!

They are going to be responsible, when you want to close your Pullip’s eyes and go to the left and right to the lever that is permanently attached to the eye mechanism.

Screw your Pullips head back together!

Three screws are all it takes now to finish your little project! Make sure that your Pullip’s eyes correctly move from side to side and close. You are finished! 😀 Congratulations!

I hope that this post was helpful to all fellow rookies out there and if a more experienced customizer somehow found this post, please tell me, if there are some tips or things I could do differently! 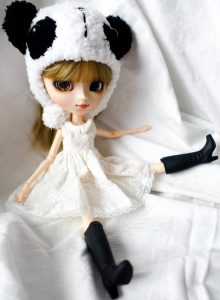 I love Lu’s new look and hope to spoil some of my fellow Pullips with new eyechips in the future! Thank you so much for reading!