It happened. I am in love with Qposket figures now. I bet, this statement is absolutely shocking nobody that is halfway familiar with the things I am investing my money in, so please look forward to my latest cutie: Alice from the Disney classic Alice in Wonderland, which is my most beloved Disney film ever! I got her in the recolored edition, since the original Alice figure that came out a few years ago, is far more expensive now. When I found out about the newer version, I did not want to miss out again and ordered her from Ebay. 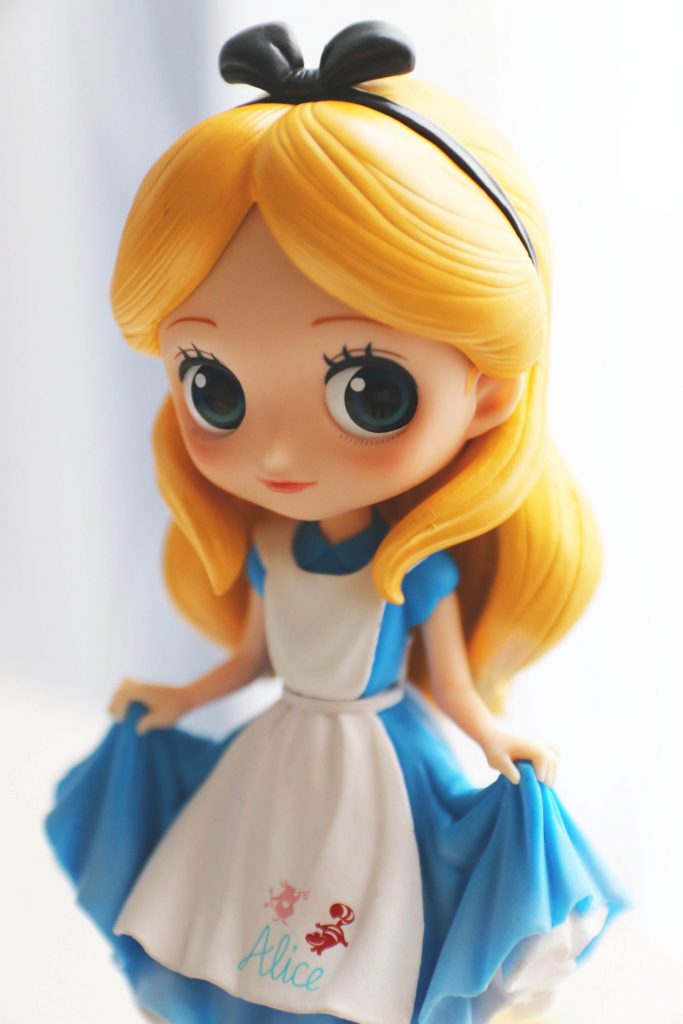 In general the figures of this series count 13,5 cm/5,3 inches, which is neither too big or too small in my opinion. I also like that they are quite sturdy. In the Qposket universe ‘recolored version’ basically means that her hair is painted in a color with a pearly sheen. The rest of the colors of her dress are slightly different as well, but the most prominent difference is definitely the shimmering metallic effect of her hair. If you are not a fan of this look, I highly recommend you to stay away from the recolored Qposket figures and to rather look for the original releases. 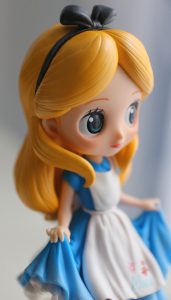 Alice’s hair is painted in a very golden blonde color with the aforementioned pearly sheen. It is very voluminous and bouncy looking with Alice’s classic black hair ribbon tied above the crown of her head. Even the ribbon has a metallic sheen and looks so cute above her middle parted hair! 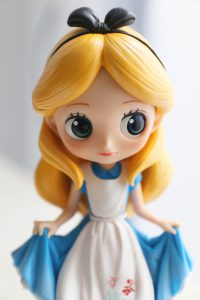 Qposket figures’ faces are known for having big eyes, which often remind people of Blythe dolls. My favourite thing about their faces is that their complexion appears quite matte, while their eyes are painted super shiny. Alice has beautiful dark and middle blue colored eyes with black eyeliner on top and three big black upper lashes. Her lower lashes are grey and super thin. Her eyebrows are painted in a light brown, her lips have a light salmon color and she is wearing a soft touch of blush. 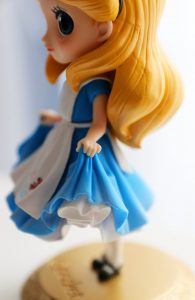 Her pose is one of my favorites! Alice appears to be getting ready for a curtesy, lifting her dress with both hands. She is such an elegant little lady! 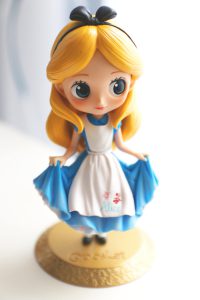 The outfit is just what you would expect from your classical Alice: A simple blue dress with a white apron and fluffy white underskirt. The nice thing about this figure is the color variation of the skirt, which imitates the effect of reflecting light. It changes from a rich middle blue to a sky blue above the dress’ hemline. 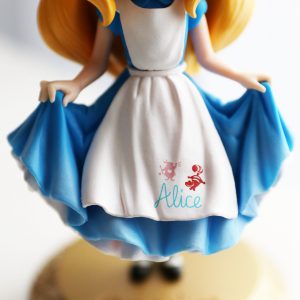 Even the Cheshire Cat and the White Rabbit make an appearance on Alice’s white apron. Both of their silhouettes are printed on it, the White Rabbit’s in a light rose and the Cheshire Cat’s in a dark wine color above Alice’s name written in turquoise. To round up her outfit, she is wearing simple white tights and black Mary Janes. 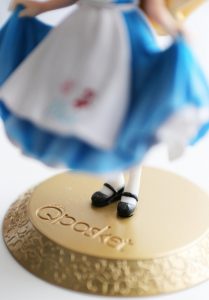 She comes with a golden stand, which says ‘Qposket’ on it and looks very nice! I have seen worse or less exciting figure stands. It does its job and I sure won’t say anything against the ornaments on it. It works perfectly for Disney characters! 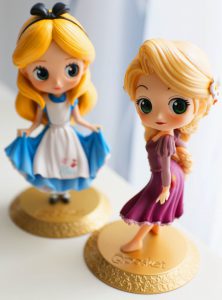 Alice is my second Qposket figure after Rapunzel. Both are recolored versions and have their metallic hair in common. They look immensly cute next to each other and, even though I am repeating myself, I cannot get over how well the creators of Qposket translate movement onto their figures! I have pre-ordered Princess Aurora as Briar Rose and hope to receive her soon to have an original girl to compare to my recolored cuties.

If you are interested in my review about Qposket’s Rapunzel, feel free to click here! Which is your favorite Qposket figure (it does not have to be a Disney character)?