Azone International is a Japanese doll company that releases a lot of dolls on a regular basis. They have different series and sizes with adorable designs. They are also known for their high quality stock outfit and love for details. It is not that easy to get your hands on Azones in Central Europe because retailers only get extremely limited stock, but things are changing, since Azone just recently started expanding their market by releasing their first North American exclusives, which makes me optimistic for the future. Today I am going to show you my first Azone doll, Aquamarine Alisa, a release from 2016! 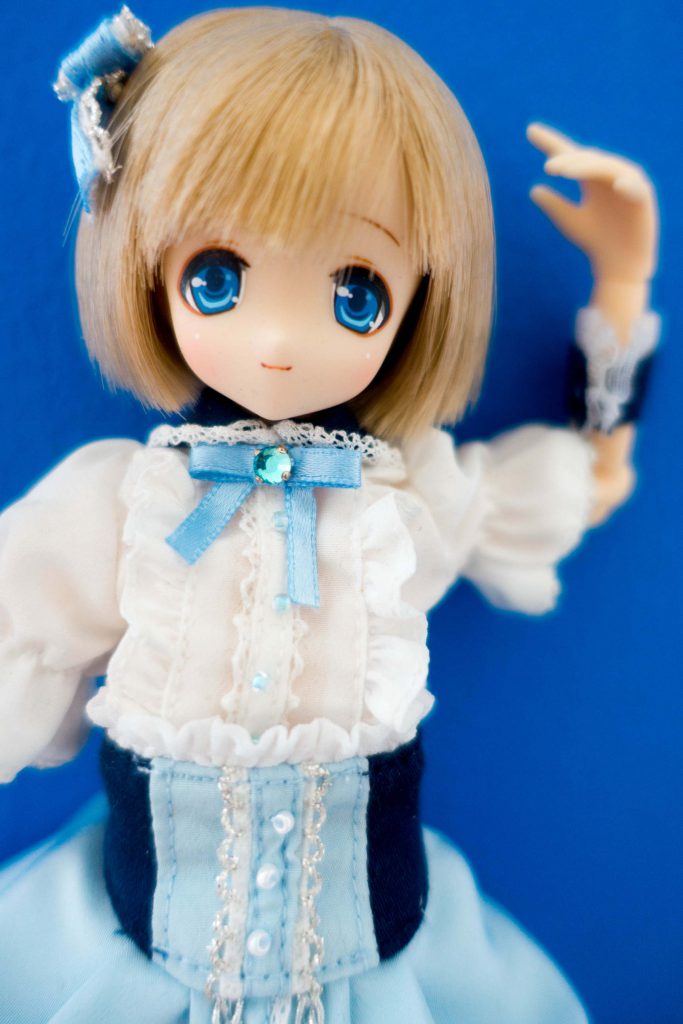 Alisa is part of Azone’s series SAHRA’S à la mode. Sahra is an original character from Azone and she is a highschool girl, who loves to dress up with her friends. At first they were four girls in total, but now they are a group of five. Each year there is a new theme and it is so interesting, how the style of each individual doll differs from the year before. Last year’s theme of the SAHRA-series was Twinkle à la mode and was centered around gemstones. Alisa’s stone was the aquamarine, which compliments her eyes beautifully. As you can see, she is quite different from Pullip or Blythe dolls because she does not have an über dimensional large head. Although she has the same scale bodywise (her clothes fit my Pullips perfectly and vice versa), she seems a lot tinier to me. Also her eyes are painted on, which makes her a lot manga- or anime-like. Getting an Azone doll is definitely a new experience! The dolls in this series are on a 1/6 scale. 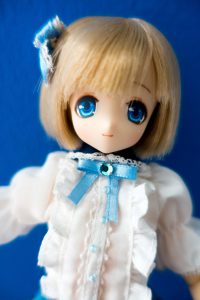 She has big beautiful indigo blue eyes with a hint of light blue, black eyeliner and brown eyeshadow going all around the outer edges of her eyes. Her eyebrows and mouth are pretty minimalistic, since they pretty much consist out of a simple brush stroke. The color of her eyebrows is light brown, while her mouth is a really dark brownish red color. Her overall expression looks calm and kind. Look at that button nose, courtesy of her face mold! 🙂 Alisa’s cheeks are softly blushing and on the top middle of her cheekbones, there is a small white dot on each side. Probably to show a beaming freshness?! It works and I love it! 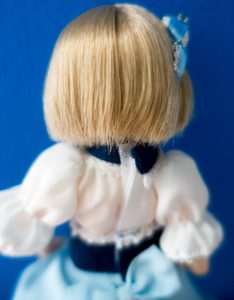 Her hair is rooted, dark blonde and chin length with long, uneven cut, sideswept bangs in the front. It is very soft, but also very easy to get messed up. So please make sure that you do not lean her head against something and sit her up straight because it could leave a bump in her hair structure.

Alisa is on a Pure Neemo M body, which feels pretty robust and easy to pose with. A big difference to Pullip’s stock body or obitsu bodies are the sharp angles of the elbows and knees, when they are bent. What I like most about the Pure Neemo is the posture it allows your doll to have, meaning that it almost seems, as if she possesses strength of her own. Also really great is the bonus of getting a second pair of hands to change her expression. The first pair of hands is open with every finger spread outwards, which gives them a big welcoming gesture. The second pair of hands has a relaxed gesture.

Alisa being a true gem, has an aquamarine-themed outfit. It is very preppy with a cute Japanese twist. She is ready for a very exclusive party. It starts with her cute light blue hair clip in form of a bow, white lace on its outsides and a twinkling stone in its middle. It is very dainty! 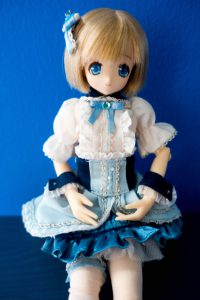 She is wearing a white ruffly blouse with dark blue collar, which has white lace around its edges, a light blue bow with a twinkling stone in the middle and light blue beads going down in the front. It has short puff sleeves with white lace and is closed in the back with velcro. She is wearing dark blue wristlets with white ruffles at the ends and a light blue bead on each side. Covering about half of her blouse, is her combination of skirt and corset. It has white ruffles on top and is mainly light blue with a dark blue fabric section going all round her waistline, excluding the center, which is light blue with three white beads going down its middle and is sectioned by white and silver lace. The voluminous skirt is light blue with white lace on the hemline and ornament silver cords a little above it. It closes in the back by velcro, where it also has a bow attached to it. To be completely honest: I wish the fit on this piece of clothing was a little tighter. It makes Alisa a little bulky-looking and I prefer her outfit without it. 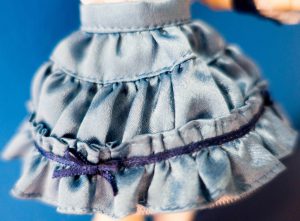 That being said, I love her voluminous metallic dark blue skirt with lots of ruffles. It comes with a white underskirt out of rough feeling fabric and both close in the back with velcro. 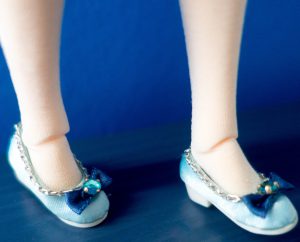 Alisa is wearing the nicest stockings out of all the dolls in my collection. They are silky white prettiness with light blue ruffles and silver cord on top. Her shoes are super pretty as well, even though they are hard to get on her feet, due to them being out of light blue fabric. They also have silver cord going around at the top and each shoe has a light blue bow with a twinkling gem in its middle. 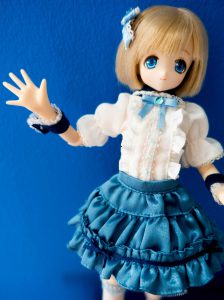 I am so looking forward to seeing more of Alisa’s family members in the Azone store in Japan. Azone dolls are a big detour from big head dolls, but I can assure you that they have their own adorable charm. Alisa often sits on my writing desk, since she is a tiny companion. I cannot imagine her being the only Azone doll in my doll family for too long and I hope that you will join me, when I share my future additions!

What are your thoughts on Azone dolls? Thank you so much for reading!