Pullip The Fox is one of two Pullips that were released as part of the Le Petit Prince series, which also included an Isul as The Little Prince himself. Last week I reviewed The Rose and this week’s review features the incredibly cute Fox, who will hopefully melt your heart just like mine. In the story of Le Petit Prince the chapter with The Fox is the most famous and contains the tale’s most quoted lines.

The quote says, ‘It is only with the heart that one can see rightly, what is essential is invisible to the eye.’

Like the rest of the series, The Fox was released in early 2016 and was rarely distributed to foreign sellers. She is still however available in Japan, where the dolls are supposed to have been a regular release. Isul The Little Prince is the only sold out doll at the moment. All dolls were a collaboration with Japanese lolita clothing brand Alice and the Pirates. By the time of release, you could also buy the same outfit in their stores to match your doll’s.

In comparison to The Rose, The Fox is full of similarities and still there are enough differences to embody a complete different character. The Fox has sparkly pinkish orange eyechips with a white accent. They are so clear and pretty, I love this type of eyechips very much! She is wearing dark eyeliner on her waterlines, only the inner corners of her eyes are bare. On her lashlines, there is subtle dark brown eyeliner, which forms a spike at the outer corners of her eyes-again the inner corners are bare. The same dark brown liner is used to accent the crease in a a thin line. My highlight is the metallic golden eyeliner she is wearing under her crease. A little bit of smokey eyeshadow is blended in the middle of the upper lid. Along the dark brown drawn on lashes on the lower lid is also golden eyeshadow, which is repeated above The Fox’s crease. Everything about her eyes is perfect! 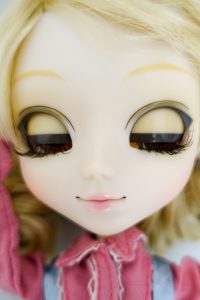 The Fox’s eyelids are slightly golden with dark brown eyeliner. Her brows are drawn on in a golden blonde. The lips are overall glossy and only have a light pink tint in their middle. She is also wearing light pink blush under her cheekbones. In conclusion, she is definitely one of my sweeter and younger looking Pullips. 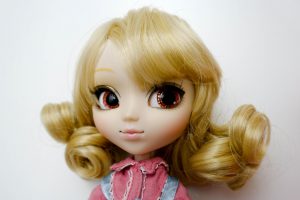 On its own the wig is borderline terrible. Positive things first: The color is a lovely golden blonde and fits her concept wonderfully. I also like the style with its side swept bangs and short curls, which hold their shape due to some product in them. They are a bit frizzy, but what really pains me is how obvious the wig cap is visible in several places. Please keep in mind that the wigs differ from doll to doll. Maybe yours will be better! 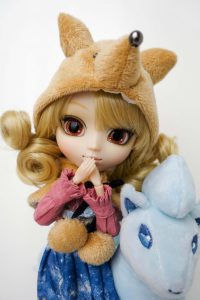 Also a reason, why the wig is not a big dealbreaker for me, is her foxy cape including an even foxier hood. It is overall out of light brown plush and lined on the inside with white cotton. The hood is in the form of a fox’s head with filled ears and snout. Its eyes are two small silver buttons and the tip of the snout is a silver bead. The cape completely covers her shoulders and allows her blonde curls to stick out on the sides, while it also covers her neck, including eye buttons and mechanism. The cape closes in the front with one press stud and is embellished with a bow out of black velvet. A darling addition to the bow are the two filled plush pompoms dangling at the end of its strings. They are out of the same plushy material as the rest of the hoody. When The Fox is wearing it, it completely covers up all of her bald patches. It is such a nice piece of stock that I do not mind keeping it on her. Actually, I even think that it is my favorite!

Similar to The Rose, The Fox’s stock outfit mainly consists out of a fancy blouse paired with a lolita style dress. The Fox’s blouse is of a simpler kind. It is out of pink cotton with long sleeves that have a small row of ruffles at the ends. It has an asymmetrical Peter Pan-collar with white lace going all around. This white lace is also used in two rows on each side in its middle front, where it is closed with velcro.

The bodice of the dress has really pretty details. The straps are out of simple baby blue ribbon. In the top middle, there is a double bow out of the same material. It is sitting upon a shimmery white fabric, which goes all the way around, and right above a sewn on gold star pendant. Also going all around, is a strip of big golden lace. The main fabric of the dress is practically the same like The Rose’s; it has the same silky material and the same print, which shows illustrations from de Exupéry near the hemline. Only its main color is a beautiful medium blue and not a purple pink. Another difference is that the blue skirt and the underskirt of The Fox are not sewn together at the bottom. This gives the volume of the dress a different look. There is also only one layer of white ruffles out of tulle at the bottom. The dress closes in the back with velcro and the only embellishment there is a simple baby blue bow.

The boots are nothing special. They are big chunks out of brown plastic, which were moulded to give the impression of heeled lace-up boots. To get them on better, they are open in the back, going all the way down to her heel. The total opposite are her cosmic medium blue tights, which are also directly related to The Rose. I wish, I had tights like that!

There is not really a lot left to say, since I hope that I could be quite persuasive in telling everybody, how wonderful the Le Petit Prince dolls are. Sometimes I wish, I had the Isul to match my Pullips, but since all the Groove dolls I have so far, are Pullips, my collector’s brain is not shriecking with alarm. Never say never! 😉

Tell me your opinions on The Fox and which character is more up your alley!